a. Supervising general preparations, taking other tournaments, geographic and economic factors into consideration;

b. Approving the match schedule and kick-off times for the Competition;

ii. Judging infringements concerning the eligibility of players in the Competition;

iv. Dealing with any aspect of the Competition that is not the responsibility of any other body under the terms of these Regulations.

a. The conduct of the members of its delegation (officials and players), and of any person carrying out duties on its behalf throughout the Competition.

b. Health, travel and accident insurance cover for all the members of its delegation throughout the Competition.

c. Incidental expenses incurred by its delegation members during the course of their stay in the host countries and for any costs incurred by additional members of the delegation.

d. Paying for any costs of extending the stay of any member of its delegation throughout the Competition, unless otherwise approved by Campeones Cup Committee.

e. Applying for visas in good time from the diplomatic mission of the host country or countries, as necessary.

f. Attending press conferences and other official media activities organized by Campeones Cup Committee and in accordance with its instructions.

a. All Competition Matches will be played under the current Laws of the Game as approved by the International Football Association Board (“IFAB”) and published by FIFA;

b. In the case of any discrepancy in the interpretation of the Laws of the Game, the English and Spanish text shall be equally authoritative.

d. All decisions and directives of the Campeones Cup Committee;

e. All Campeones Cup Committee marketing and media requirements, including but not limited to, the Team Media Day in which individual and group photos and video will be taken of each team upon their arrival at the venue of their first match.

V. QUALIFIYING FOR THE CAMPEONES CUP

VII. LAWS OF THE GAME

a. Cautions received during the Competition are not carried over to any other Competition

b. Red card (direct or indirect) suspensions will be served in the current Competition

c. Unserved suspensions outstanding at the end of a team’s participation in the Competition will carry over to the next Competition match for the individual player.

Unless otherwise indicated below, all medical scenarios must be handled in accordance with the policies and procedures outlined in the current MLS Medical Manual.

a. Making final decisions and plan of care, in consultation with Participating Club’s medical staff, on all emergency situations and evaluation of suspected head injury.

b. Serving as an impartial physician in the event a Participating Club does not have a physician on site.

c. Being the primary point of contact for the Campeones Cup Committee in the event of a medical emergency related to the match.

d. Be present at the pre-match coordination meeting and conduct a medical time out that includes the medical staff from both teams as well as the fourth official and emergency response team.

a. The terms the “Campeones Cup”, or commonly used to identify the Competition, and their equivalent, abbreviated or as translated into other languages, may only be used by such teams in a sporting context with no commercial implications. MLS and Liga MX owns the copyright for all these terms.

a. The MLS Cup champion from the previous MLS season in which the Competition will be played

b. The winner of Liga BBVA MX’s Campeon de Campeones (played within the calendar year of the Competition), between the winners of the immediately previous Apertura and Clausura tournaments.

a. Misconduct of players and team officials, leading to caution or expulsion.

b. Unsporting behavior of officials and/or any person acting on behalf of the Participating Club at a match.

c. Unsporting behavior of any supporters.

d. Any other incidents

a. Malfunction(s) of the VAR technology (as for goal line technology); b. Wrong decision(s) involving the VAR;

c. Decision(s) not to review an incident; and/or

d. Review(s) of a non-reviewable situation/decision.

a. Above and beyond the 5 “normal” substitutions in 3 opportunities, each team will be permitted to make up to an additional 2 “concussion substitutions” when there is a suspected/possible concussion.

b. These 2 “concussion substitutions” are permitted regardless of how many “normal”

substitutions or opportunities have already been used.

c. A “concussion substitution” may be made:

(a) immediately after a concussion occurs or is suspected;

(c) at any other time when a concussion occurs or is suspected (including when a player has previously been assessed and has returned to the field of play).

g. If each team makes a substitution at the same stoppage, both teams will be charged an opportunity.

b. three sets of the goalkeeper’s kit (shirts, shorts, socks);

d. All equipment that will be worn by the substitute players and the technical staff sitting on the bench during the matches.

b. One (1) stationed at the Fourth Match Official’s table either on a Ball Stand or on the table;

c. A minimum of thirteen (13) placed on the Ball Stands (as defined in Section XVI);

d. One (1) behind each goal’s AdTrac/LED field boards on the ground and accessible by the Ball Retriever.

Ball stands (each, a “Ball Stand”) will be implemented in all Competition Matches. Each Competition Venue requires a minimum of thirteen (13) and maximum of fourteen (14) total Ball Stands in the following locations around theperimeter of the field: five (5) on the sideline opposite the benches; two (2) on both goal lines positioned on either side of the goal; two (2) outside each Club technical area for a total of four (4) on the bench sideline or five (5) if an additional stand is used at the Match Official’s Table. Each Competition Venue has preselected and will be provided with Ball Stand versions suitable to their stadium confines as follows:

Ball Stands will be placed around the field according to Competition guidelines as follows: 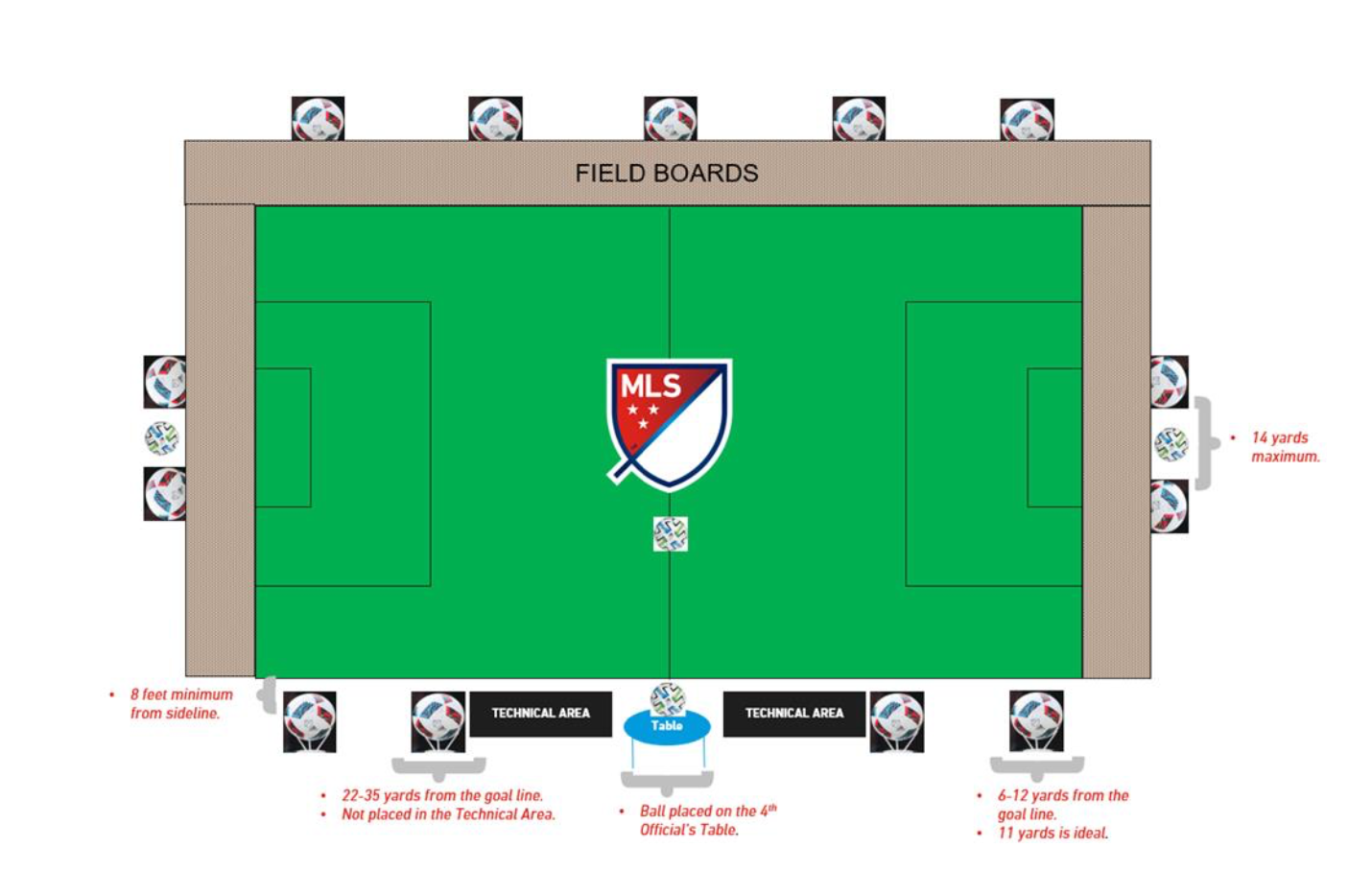 One (1) redundancy of each Ball Stand version utilized in each Competition Venue will be stored at the venue and/or used at the 4th Official’s Table and accessible at any time. Ball Stands behind a single goal must be the same version unless two (2) different versions are necessary to accommodate stadium configurations. Ball Stands on either end of the field are not required to be the same version. The Match Commissioner must ensure that Ball Stands and each respective Ball Stand ball is secure from any interference. The host Participating Club will have a minimum off four Ball Retrievers in matching jerseys provided by the Competition Committee (each, a “Ball Retriever”).

a. The host Participating Club is responsible for ensuring uniform distribution of Ball Retrievers around the field so that one end and/or sideline of the field is not disadvantaged, and that the procedure for returning balls to the ball stands is equal for each Participating Club.

b. Players will be responsible for retrieving the ball from the Ball Stand to restart play. The Ball Retriever must replace the ball on the empty Ball Stand, then immediately retrieve the errant ball and return to their positions. At no time should the Ball Retriever or any other individual deliver their ball or a Ball Stand ball directly to a player.

c. Any player who removes a ball from a Ball Stand when his Participating Club is not in possession of the restart and/or for any other inappropriate reason may be cautioned by the Referee for Unsporting Behavior.

a. Adequate insurance to cover their Team Delegation Members and any other persons carrying out duties on their behalf against all risk, including but not limited to injury, accident, disease, and travel in consideration of the applicable FIFA rules or regulations on the release of players to association teams.

b. Board and lodging of the Competition in excess of the amounts paid by the Campeones Cup Committee, including rental of meeting rooms and audio/visual technical equipment.

c. Cost associated with additional members of the association’s delegation (in excess of 40 people).

b. All domestic air and ground transportation for official Competition functions, including to and from the airport, for matches, training sessions, and match coordination meetings;

c. Board and lodging for 40 persons from visiting Participating Club.;

d. Prize money for the Participating Clubs, the amounts of which shall be determined by the Campeones Cup Committee;

e. Economy air travel, first class hotel and board, and approved per diem for the match officials.

a. One (1) catered suite for each Participating Club,

b. One Hundred Fifty (150) complimentary match tickets for each Participating Club,

d. The location of such complimentary tickets and suites will be subject to availability.

a. The Most Valuable Player will be awarded to the best player in the Competition on the basis of a vote from media in the stadium press box

XXXIV. MATTERS NOT PROVIDED FOR